Good question. With all of the low drag sailboat propellers on the market today. Why should you buy a feathering propeller?

To be upfront I am jaded. I have been selling Max-Prop feathering propellers for over 27 years. Wow, I still can’t believe I have been at PYI for that long, thanks to Kevin and Frederic for building such a great company. Sorry I digress.

To be simple the advantages of a feathering propeller are threefold. 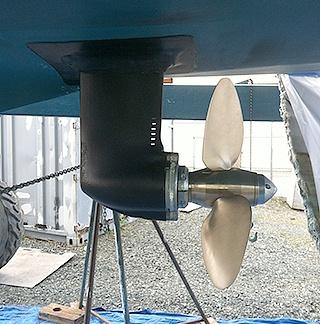 First, they are positive in their function. The torque of the shaft opens the blades, even if it is encrusted in marine growth it will open. Folding propellers use centrifugal force to open, meaning the shaft has to be rotating before there is enough force to open the blades, this causes quite a lot of shock load to the drive train.

Third, a feathering propeller is a low drag propeller. On an average 36 foot boat, a fixed two-blade would create around 70 pounds of pull if it were attached to a scale. A two blade feathering Max-Prop would only create 4 pounds of pull. Quite the difference, think of pulling a 5-gallon bucket behind your boat, that would be a drag.